Set on the Île de la Cité, the Palais de Justice is the center of Inspecteur Michel Devaux’s world. 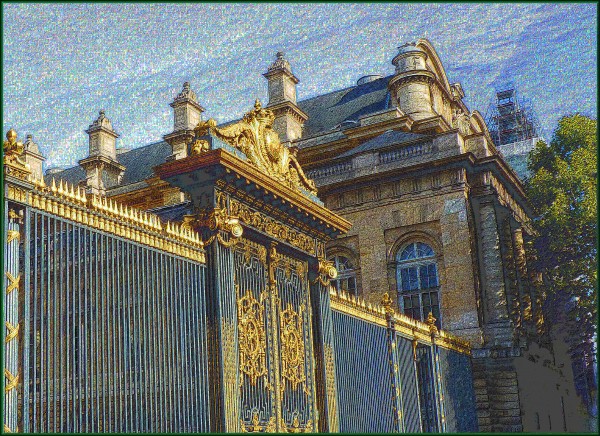 Behind its ornamental gates stand the great law courts of Paris. 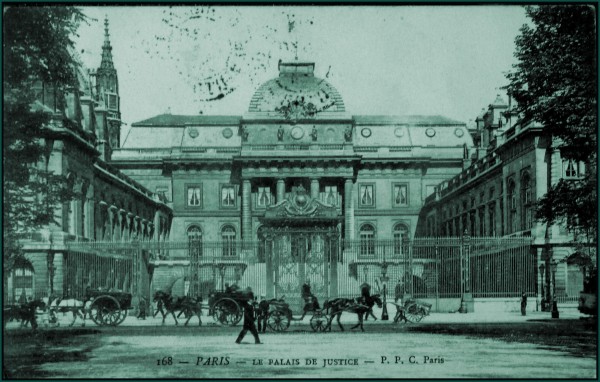 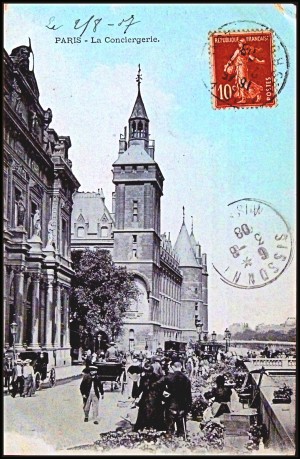 At the corner by the Pont au Change is the oldest clock in Paris, installed in 1370. 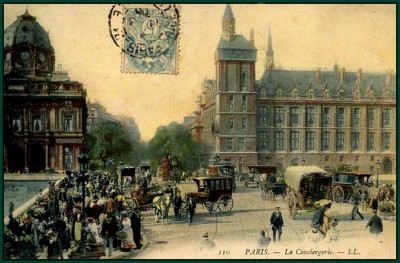 Within the walls of the Palais de Justice is the oldest prison in Paris, the Conciergerie, where the royalty and the rebels of the French Revolution were held to await their fate. It’s said that the ghost of Marie Antoinette can still be heard, sobbing in her cell. 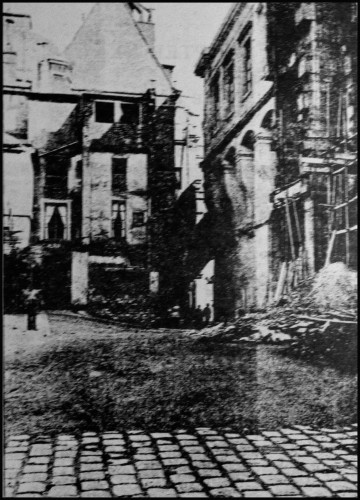 In Michel’s era, the building houses the Dépôt where prisoners are processed before being sent to other jails (or sometimes held indefinitely).

Occasionally, those arrested are marched through the streets of Paris. Most often they are brought to the Dépôt confined inside a Black Maria. 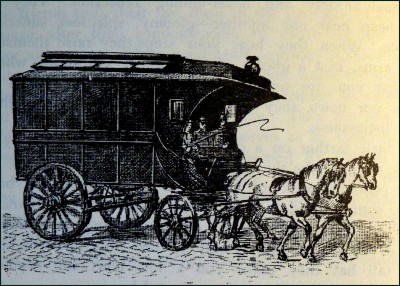 Set into the walls of the Conciergerie that face the Seine is the entrance to the detectives’ offices.

If miscreants were arrested, as they would following such adventures as depicted in this Penny Dreadful, The Dance of Death; or, the Hangman’s Plot, a Tale of London and Paris, by Detective Brownlow and Monsieur Tuevoleur, Sergeant of the French Police, they would have been taken to the Depot of the Palais de Justice in menottes, or bound with a ligote. 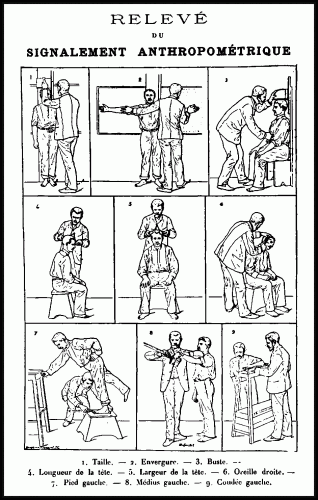 Here Michel works as a member of the Sûreté, the branch of the police which investigates crimes. Forensic science is in its infancy. Little has been done with fingerprinting and ballistics. However, the brilliant but eccentric and obsessive Alphonse Bertillon has created his own investigative world, the world of anthropomorphie. His technique involves the exacting measurement of hard bone to identify recidivist criminals, repeat offenders whom they could match in these newly created files. With special instruments also designed by Bertillon, the examiners took various measurements such as the length of the head, the left foot, and the length of the middle finger in relation to the elbow. These were recorded on a series of index cards and then filed in an equally elaborate manner. Bertillon also devised a special chart for specifying eye color. His system was ponderous, but so successful in its day that Bertillon became world famous. In Paris, cabaret singers sang satiric songs about Berthillonage. 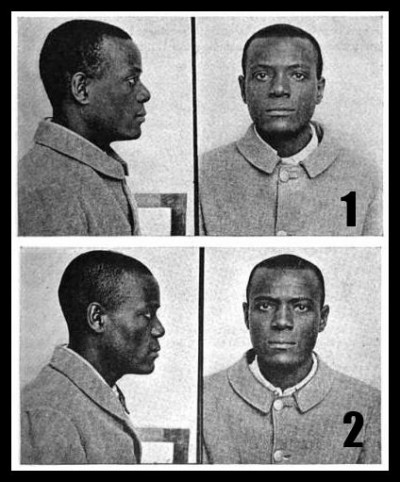 The system was used to register thousands of criminals during Bertillon’s reign as head of the Department of Judicial Identity in Paris. For two decades it was employed in France and many other countries.

Significant failures, such as the surreal case of Will and William West brought Bertillonage into disfavor. Possibly brothers separated at birth, they grew up as strangers. They were arrested separately and both sent to Leavenworth. Their Bertillon measurements were identical.

However, it was the advance of the far easier technique of fingerprinting which was the true death knell for Bertillon’s system. Nonetheless, Bertillon’s innovations do endure. Although photography was already in use, he was the first to advocate for meticulous crime scene photographs, and is credited with creating the modern mug shot, for which he developed camera techniques to take simultaneous front and profile portraits. He even took one of himself. 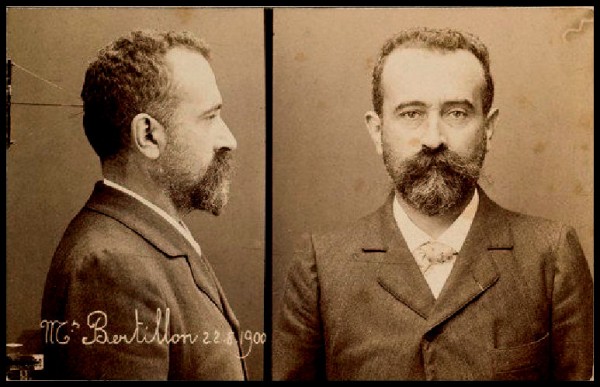 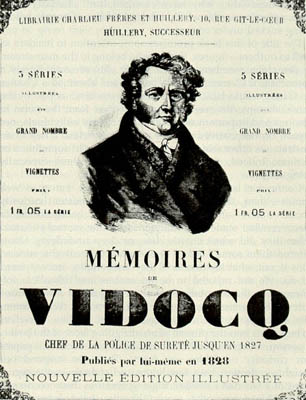 Even before Bertillon, Eugène François Vidocq was considered to be one of the fathers of criminal investigation. Thief and forger turned informant, Vidocq was so successful in helping to capture his former cohorts, Napoléon Bonaparte created the office of the Sûreté to exploit his unique talents and named him chief. Vidocq was known as a master of disguise. His life and his romantisized memoirs have been the inspiration for many authors. Victor Hugo and Edgar Allen Poe were inspired by him in the creation of both their heroes and villains.

In Michel’s time, Armand Cochefert was chief. If not as melodramatic a character as Vidocq, Cochefert was an interesting leader with progressive views and a penchant for picking pockets. For more about actual cases in fin de siècle Paris, I recommend the gruesome but fascinating book Crime Album Stories by Eugenia Parry.

La Conciergerie did not begin life as prison, but as a medieval palace. For centuries it was the seat of Merovingian kings. It was home for King Louis IX before he became Saint Louis and to his Queen Eleanor before she ran off with Henry II to rule England. Louis built La Sainte Chapelle, one of the most beautiful of all Gothic churches, to be his own personal place of worship.

The lower chamber, where the servants prayed, is painted deep scarlet and ultramarine blue set off with gilding, as are the walls and columns of the royal chapel above. 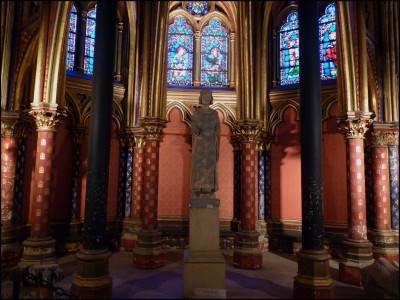 Rising up above the walls of the king’s chapel are windows of stained glass which make up almost three quarters of the room.

The brighter the day, the more brilliant the glass. In full sunlight, the glowing interior seems as much fairy tale palace as church.

La Sainte Chapelle is close by Notre Dame. Michel walks past it every morning on his way to the Palais de Justice. In spring the cherry blossoms bring bittersweet pain with their fleeting promise of eternal renewal amid the unfolding of tragic memories of the Commune. 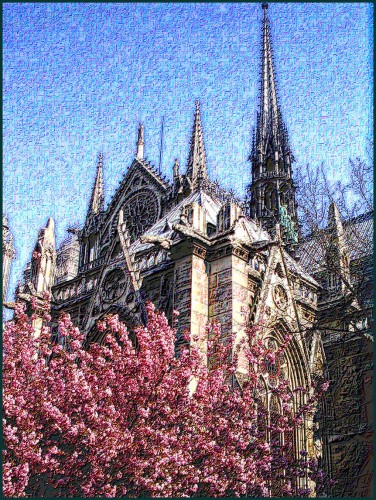 Looking up at these guardians of the city, Michel thinks of the bell ringer, Quasimodo. Like all Parisians, the cathedral is forever wedded in his mind to the novel which saved it from demolition, Victor Hugo’s tragic The Hunchback of Notre Dame. 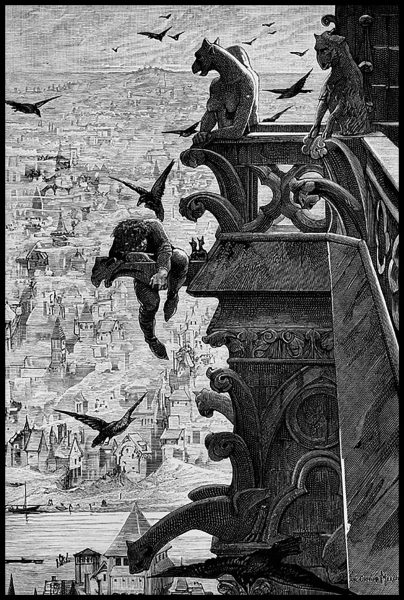 A small bridge links the heart of Paris, the Île de la Cité, with the Île St. Louis. Once no more than a cattle pasture, the smaller island now displays the elegance of its 17th century rennovations.

From these islands in the center of the Seine, the other arrondissments coil outward over the Right and Left Banks, in a shape known affectionately as the snail.

Michel lives at the far end of the Île St. Louis looking towards Notre Dame. 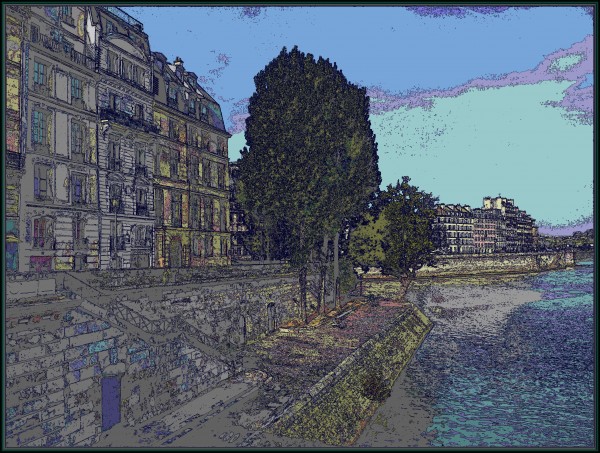 At night the bright arc lamps cast their glow on the Seine, and Michel savors the river from his window. 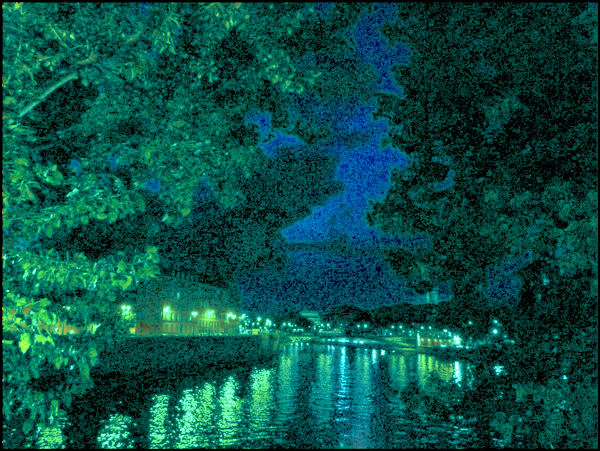 Michel’s rare free time might be spent wandering among the stalls of the bouquinistes on the Left Bank.

Music distracts Michel from unhappy memories. His guitar is most often a solitary pleasure, but sometimes he plays for friends.

And he continues to practice savate, the French art of kickboxing. Savate means “old shoe” and was developed by sailors in the 19th century.

Paris seems peaceful, but change is her only constant. Michel was born into the urban revolution of Louis Napoléan and his his civic planner Georges Haussmann. The medieval buildings and narrow streets were almost all demolished to create a glamorous modern city of grand boulevards.

The changes were celebrated by some and lamented by others. Victor Hugo and Charles Baudelaire both longed for the old, intimate Paris with tiny twisted streets and found the open expanses soulless.

But the majority celebrated Paris’ rebirth as the showplace of Europe.  Many huge and hugely expensive projects have been completed ~ projects as diverse as the desperately needed renovation of the old sewer system…

…the opening of the fabulous new Opera house.

Michel’s morning walk is disturbed with construction as modern progress continues with plans for the Metro. 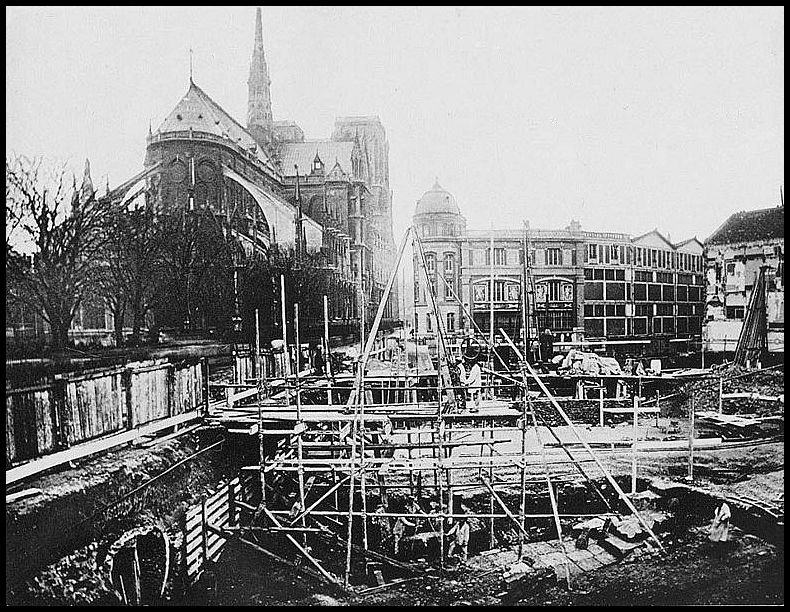 The plans for this metropolitan service are vast. 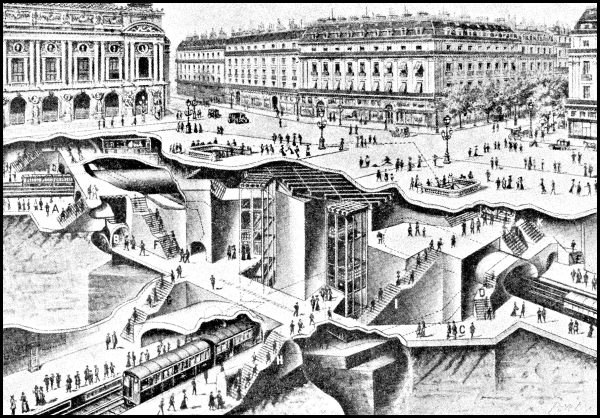 Paris is already famed for her modern train stationss that connect people to more and more parts of France at faster and faster speed. The blur of movement as they streak through the countryside may even have influenced the style of the Impressionists.

But it is not just train travel that has expanded. Bicycles are all the rage. There are races for them, and for motorcycles as well. The first automobiles are now chugging about France. 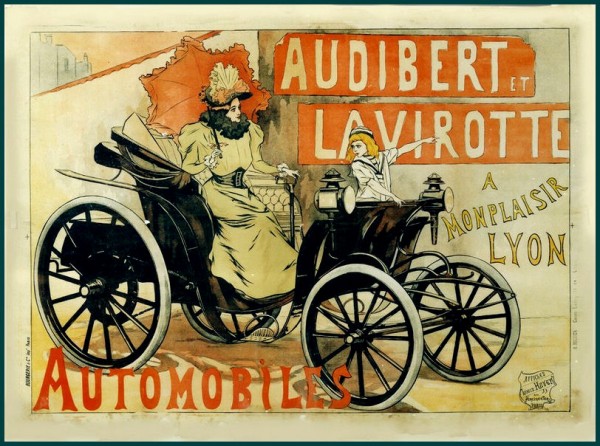 Paris’ skyline altered forever with the construction of the Eiffel Tower for their fourth World’s Fair. Eiffel Tower during the Universal Exposition of 1889. 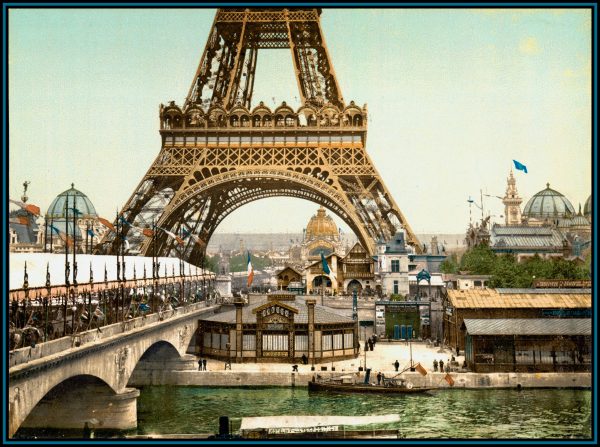 And now Paris prepares herself for the exposition Exposition Universelle of 1900, when everyone will long to travel to the City of Light.

The next century approaches quickly. It is an era of ongoing change. But these changes in the cityscape are nothing compared to the continuing political upheavals of France. Michel has already lived through a war and the valiant, blighted insurrection of the Paris Commune.

His heart, mind, and soul have been shaped by those ravages and their aftermath.

The first banner art image is L’Arrestation de Louise Michel en Mai 1871 by Jules Giradet, the second is a Photochrom print of a period postcard from the Library of Congress, submitted to Wikimedia Commons by trialsanderrors.