My One Paranormal Experience:

Filled with a haunting memory, I made a return pilgrimage to Auvers-sur-Oise, a town a little to the north of Paris where Van Gogh spent the last three months of his life, and where he completed seventy-seven paintings. With all his conflicts and suffering, his productivity was amazing.

With me on this second visit was Sandra, my dear friend from Eugene, Oregon. For her it was not only the first trip to Auvers-sur-Oise, but to France. She wanted to spend most of her getting to know Paris, but I said we should see a small town as well. She loves Van Gogh, and the town is close, though the trains are finicky.

It’s a charming town, with reproductions of Vincent’s art set about the sites he painted in the town and on the pathways leading to the wheat fields and the cemetery, and a museum in the Auberge Ravoux, the inn where he lived and died.

It was raining lightly in the morning and early afternoon, grey, wet, and cloudy, but not very cold. The greyness and rain proved an advantage for our venture into the tiny Vincent Van Gogh museum. There were no crowds of tourists this time, the building was all but empty! Most of the ground floor is taken up by the restaurant. There is a small gift shop on the premier étage (our 2nd floor), where you may buy tickets and memorabilia. The woman in charge explains that the room is mostly empty, but is very “emotional.”

And so you climb the stairs to the little attic room. The first time I was there, I expected to be moved to be in the room where Van Gogh had lived and died, but not with the weight and intensity I experienced as I climbed the stairs and entered the room. I was overwhelmed with grief. At first, I told myself that I was probably projecting my natural sadness at such an amazing life cut short with no recognition. But, in reflection, it felt like something that entered me rather than the familiar sensation of sadness welling from within.

I was curious if I would feel a similar sensation again. For all my fascination with the occult, I don’t think I am particularly sensitive compared to many of my friends. But I felt the same sensation as I began climbing the staircase, even more intensely, for I was very aware of it as apart from me, a weight descending on me and filling me with devastating sorrow.

The few other people in the room did not seem to feel it—except for Sandra. We looked at each other and it was all we could do not to burst into tears. The feeling went as soon as we left. There was only the lingering amazement at having felt so distraught, and the memories it stirred of Vincent’s difficult life. We felt our own sadness that his life ended so unhappily, but not this other weight of emotion. After his death, the room was never rented again, supposedly because the rooms of suicides are considered bad luck. But I wonder if other people did not feel that resident grief and find it impossible to stay there. I believe what we experienced is known in the paranormal world as an imprint. I did not feel the presence of a person—a ghost—but of a despair that had penetrated that tiny room. There is controversy now whether Van Gogh committed suicide, or was the victim of an accidental shooting. There appears to be evidence both ways.

Down the hall is a larger room where we watched the movie they have about Auvers-sur-Oise and Vincent’s time there, with images of the art he painted, since the little town can’t afford to own one now.

One of the saddest moments I felt at the Auberge Ravoux was not Vincent’s room with its lingering imprint, but a quote in the restaurant of Van Gogh saying that perhaps, one day, he might have a show in a little cafe like this. That quote brought the far more familiar sense of sadness welling from within. 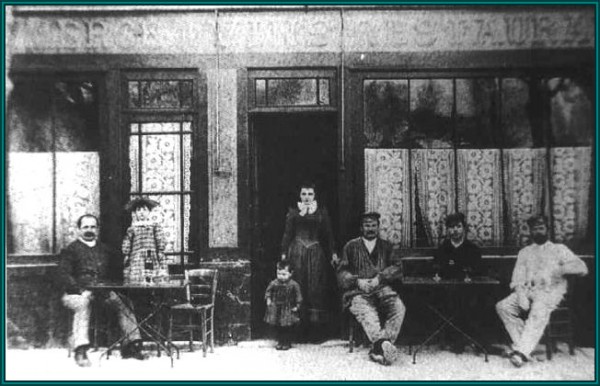 Though there were these moments touched with unhappiness, the visit to the town and the inn were overall positive and happy. Sandra and I had a good lunch in the café where Vincent ate (duck stew for me with potatoes, apples and cherries, fish stew for her). It was raining much harder during our meal, but the rain subdued to a sprinkle after.

After our pleasant lunch, we wandered through Auvers-Sur-Oise where Vincent did so many wonderful paintings. One of the most famous being the church.

In the pattering rain, we went on up past the church along the road to the cemetery. 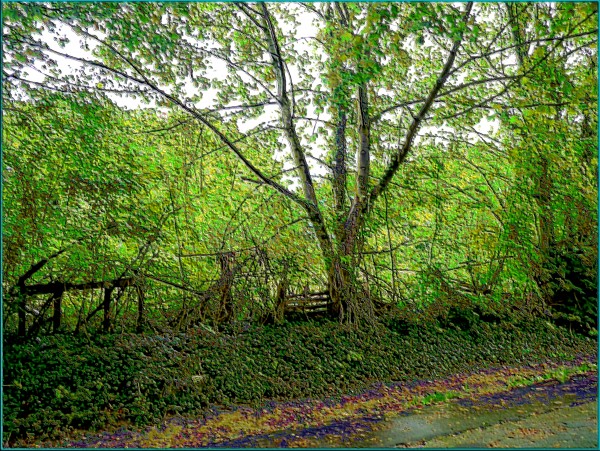 Beside the road you see the wheat fields he painted.

Vincent is buried with his brother Theo beside him. Two simple white gravestones with lots of ivy growing over them. Sad, but in a peaceful way.

It’s a pretty cemetery, not very fancy but with a few nice memorials. There was one spectacularly cheerful one of another artist. I didn’t memorize his name, but the flat stone is covered with brilliant mosaics rather like Chagall, all very celebratory.

When we left the cemetery to walk back to the town, the rain had departed, the sky was bright blue, filled with fluffy clouds, and the sun was shining bringing out all the colors of the leaves and flowers. 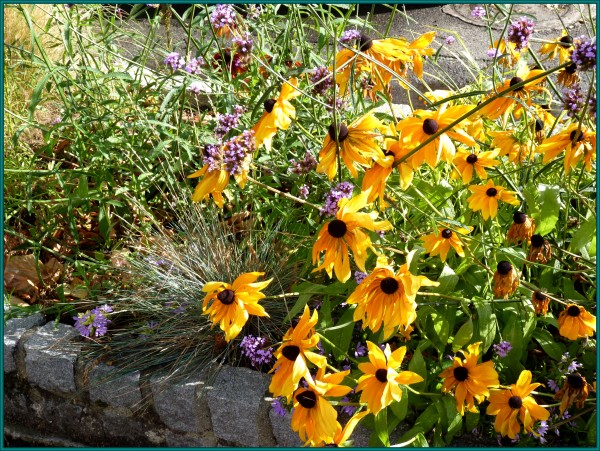 After passing through the magical mural underpass, we caught the last train back to Paris, after our sweet and sad day in Auvers-sur-Oise, the memory imprinted in our hearts.

There is a full day’s worth of adventures or more in Auvers-sur-Oise. The entire morning can be spent at the chateau where they have an Impressionist culture museum. Not paintings, but installations to let you experience a fragment of what life would have been like in the later 19th century. Click Van Gogh’s painting below to visit the site.

During the 19th century, a number of painters lived and worked in Auvers-sur-Oise, including Charles-François Daubigny, Jean-Bapiste-Camille Corot, Camille Pissaro, Paul Cézanne, as well as Vincent Van Gogh. Daubigny’s house is now a charming museum where one can see murals painted on the walls by the artist, his family and friends, such as Honoré Daumier, and rooms decorated in period style.

The town does have a charming little museum which features the work of Daubigny and also of the school of Art Naif. We saw a wonderful collection which included many cats. Though none are available to show here, this image is similar, and there are others to be glimpsed on display at the Museum’s page. (Sadly this no longer exists).

All the above, Vincent’s museum, and one more delightful extra, a little Absinthe Museum filled with posters, historical information, and a collection of accoutrements for the absinthe ritual.

There is more about the reign of the Green Fairy on the Absinthe page of my website, under the Revenants.

Ont un Halloween Heureux! That’s what I’d like to say, since heureux co-mingles nicely with horreur in the ear, but Joyeux Halloween! is probably correct. I love Halloween, and in honor of the holiday, I’ve done a new page for my website about the catacombs. Click on one of les catacombes image in this post to visit it. Meanwhile, you can learn a little here about Halloween in the French style. I hope I’ve given you sufficient vocabulary. Vous serez surpris de voir à quel point beaucoup français vous savez déjà.

Par exemple, ici, c’est un tombeau au cimetière du Père Lachaise. Halloween is not a French holiday, but they’ve adopted it so les petits enfants can put on classic déguisements and get some bonbons. But the French have their own Day of the Dead, though it is far more somberly celebrated than in Mexico. November 1st is La Toussaint, or All Saint’s Day. Les cimetières are visited and chrysanthèmes left on the graves in magnificent displays praised as worthy of tourist visits.

But back to Halloween… There are the usual costume possibilities. Various monstres are as popular there as they are here. Le Diable is always present. Terrifiants fantômes hanter le monde. Paris lays claim to one of the most famous fantômes .
In 1884, this fashionable outfit was suggested if you wanted to be une sorcière.
She does not wear a masque, but she does hold un balai.
Elle a deux familiers. Un petit hibou perché sur son chapeau, et un chat noir rideaux ses épaules.
Toutefois, ce chat noir beau est beaucoup plus célèbre.
Il est le véritable symbole de la Butte Montmartre et la fin du siècle.

Vampires et autres créatures de la nuit, font leur apparition sur la scène.
The vampire in the picture has her own winged symbol.
Une autre créature renvoyée par le royaume de la mort est la momie.
Perhaps your jeune fille would like to be a zombie? C’est le même mot en anglais ou en français.
Or perhaps, you could design a chapeau avec un lutin, as in this strange illustration.
What other French words might you need for a proper Halloween?
Here’s an new one for me: un feu follet for a Jack O’Lantern.
Also new and strange is un épouventail is a scarecrow.
For creepiness, we must needs have a creepy crawly critter.
And finally, a skeleton.
Most versatile, this mummified couple could be a zombie duo, or Death on a mount.
He holds a link to les catacombs. What better trip to take on Halloween?