Ont un Halloween Heureux! That’s what I’d like to say, since heureux co-mingles nicely with horreur in the ear, but Joyeux Halloween! is probably correct. Meanwhile, you can learn a little here about Halloween in the French style. I hope I’ve given you sufficient vocabulary. Vous serez surpris de voir à quel point beaucoup français vous savez déjà.

Halloween is not a French holiday, but they’ve adopted it so les petits enfants can put on classic déguisements and get some bonbons.  Perhaps your jeune fille would like to be a zombie?

C’est le même mot en anglais ou en français.
Halloween is not a French holiday, but they’ve adopted it so les petits enfants can put on classic déguisements and get some bonbons. But the French have their own Day of the Dead, though it is far more somberly celebrated than in Mexico. November 1st is La Toussaint, or All Saint’s Day. Les cimetières are visited and chrysanthèmes left on the graves in magnificent displays praised as worthy of tourist visits.

But back to Halloween… There are the usual costume possibilities. Various monstres are as popular there as they are here. Le Diable is always present. Terrifiants fantômes hanter le monde. Paris lays claim to one of the most famous fantômes.
In 1884, this fashionable outfit was suggested if you wanted to be une sorcière.
She does not wear a masque, but she does hold un balai.
Elle a deux familiers. Un petit hibou perché sur son chapeau, et un chat noir rideaux ses épaules.
Toutefois, ce chat noir beau est beaucoup plus célèbre.
Il est le véritable symbole de la Butte Montmartre et la fin du siècle.

Vampires et autres créatures de la nuit, font leur apparition sur la scène.
Une autre créature renvoyée par le royaume de la mort est la momie.
Or perhaps, you could design a chapeau avec un lutin, as in this strange illustration.
What other French words might you need for a proper Halloween?
Here’s an new one for me: un feu follet for a Jack O’Lantern.
Also new and strange is un épouventail is a scarecrow.
For creepiness, we must needs have a creepy crawly critter.
And finally, a skeleton.
Most versatile, this mummified couple could be a zombie duo, or Death on a mount.
He holds a link to les catacombs. What better trip to take on Halloween?

If you wanted a creepy experience in the era of my novels, you could visit Cabaret du Néant, of nothingness, and be treated to a body dissolving in a coffin. You could enter the coffin yourself, if you chose. 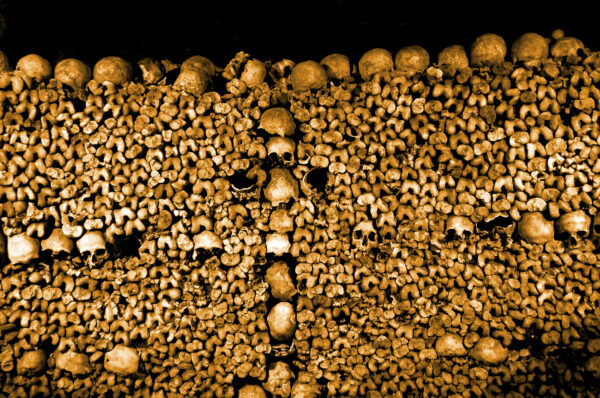 RULE #1 – NEVER OPEN A BOOK WITH THE WEATHER:

Get Shorty by Elmore Leonard:
When Chili first came to Miami Beach twelve years ago, they were having one of their off-and-on cold winters: thirty-four degrees the day he met Tommy Carlo for lunch at Vesuvio’s on South Collins and had his leather jacket ripped off. One his wife had given him a year ago for Christmas, before they moved down here.

The Big Sleep by Raymond Chandler
It was about eleven o’clock in the morning, mid October, with the sun not shining and a look of hard wet rain in the clearness of the foothills. I was wearing my powder-blue suit, with dark blue shirt, tie and display handkerchief, black brogues, black wool socks with dark blue clocks on them. I was neat, clean, shaved and sober, and I didn’t care who knew it. I was everything the well-dressed private detective ought to be. I was calling on four million dollars.

1984 by George Orwell
It was a bright cold day in April, and the clocks were striking thirteen. Winston Smith, his chin nuzzled into his breast in an effort to escape the vile wind, slipped quickly through the glass doors of Victory Mansions, though not quickly enough to prevent a swirl of gritty dust from entering along with him.

Little Dorrit by Charles Dickens
Thirty years ago, Marseilles lay burning in the sun one day.
A blazing sun upon a fierce August day was no greater rarity in Southern France then that at any other time, before or since. Everything in Marseilles, and about Marseilles, had stared at the fervid sky, and been stared at in return, until a staring habit had become universal there. Strangers were started out of countenance by staring white houses, staring white walls, staring white streets, staring tracts of arid road, staring hills from which verdure was burnt away. The only things that did not seem fixedly staring and glaring were the vines drooping under their load of grapes. These did occasionally wink a little, as the hot air barely moved their faint leaves.

All The King’s Men by Robert Penn Warren
To get there you follow Highway 58, going northeast out of the city, and it is a good highway and new. Or was new, that day we went up it. You look up the highway and it is straight for miles, coming at you, with the black line down the center coming at you and at you, black and slick and tarry-shining against the white of the slab, and the heat dazzles up from the white slab so that only the black line is clear, coming at you with the whine of the tires, and if you don’t quit starting at that line and don’t take a few deep breaths and slap yourself hard on the back of the neck you’ll hypnotize yourself and you’ll come to just at the moment when the right front wheel hooks over into the black dirt shoulder off the slab, and you’ll try to jerk her back on but you can’t because the slab is high like a curb, and maybe you’ll try to reach to turn off the ignition just as she starts the dive. But you won’t make it, of course.

And what about endings? 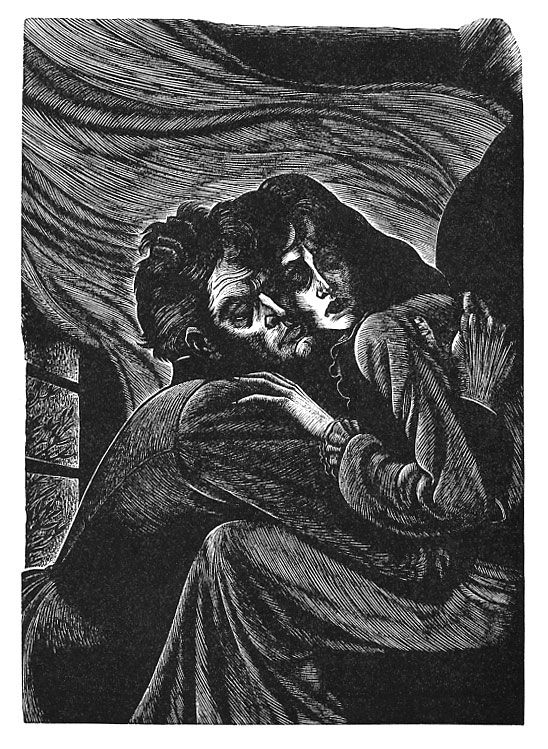 Wuthering Heights by Emily Brönte
“I lingered round them, under that benign sky: watched the moths fluttering among the heath and harebells, listened to the soft wind breathing through the grass, and wondered how anyone could ever imagine unquiet slumbers for the sleepers in that quiet earth.”

The Dead by James Joyce
It had begun to snow again. He watched sleepily the flakes, silver and dark, falling obliquely against the lamplight…. Yes, the newspapers were right: snow was general all over Ireland. It was falling on every part of the dark central plain, on the treeless hills, falling softly upon the Bog of Allen and, farther westward, softly falling into the dark mutinous Shannon waves. It was falling, too, upon every part of the lonely churchyard on the hill where Michael Furey lay buried. It lay thickly drifted on the crooked crosses and headstones, on the spears of the little gate, on the barren thorns. His soul swooned slowly as he heard the snow falling faintly through the universe and faintly falling, like the descent of their last end, upon all the living and the dead.

Elmore Leonard’s RULES are making the rounds again. I can read an Elmore Leonard book with delight, but I dislike every single one of his rules except the last one about leaving out the boring bits. Years back, I wrote a guest post to that effect: Breaking All The Rules for D.V. Berkom’s blog.
Below is the expansion on one of the rules I find the most annoying, perhaps because those who truly find the “said” tag invisible continue to tout it to those who find it screamingly apparent.

P.B.C.’s, as he affectionately initializes them, are a favorite of my husband.  It’s the extra peanut butter that makes them so good.  They are a very dense, chewy cookie. These are my own devising, and I’m very proud of how delicious they are.

Grated rind of one small orange

Preheat the oven to 350.  Lightly butter a cookie sheet.

Cream together the butter and brown sugar, then cream in the peanut butter.  Add the beaten egg.   Add the flavorings.  Sift in the dry ingredients.  Work with a big spoon or your hands until all the flour is incorporated.

Roll the dough into balls and place on the prepared cookie sheet.  Press the cookies with a flour-dipped fork, making crosshatched patterns.  Bake the cookies for about 12 minutes.  Cool a couple of minutes, and then remove from pan.  Makes about 2 – 4 dozen, depending on how big you make the cookies.